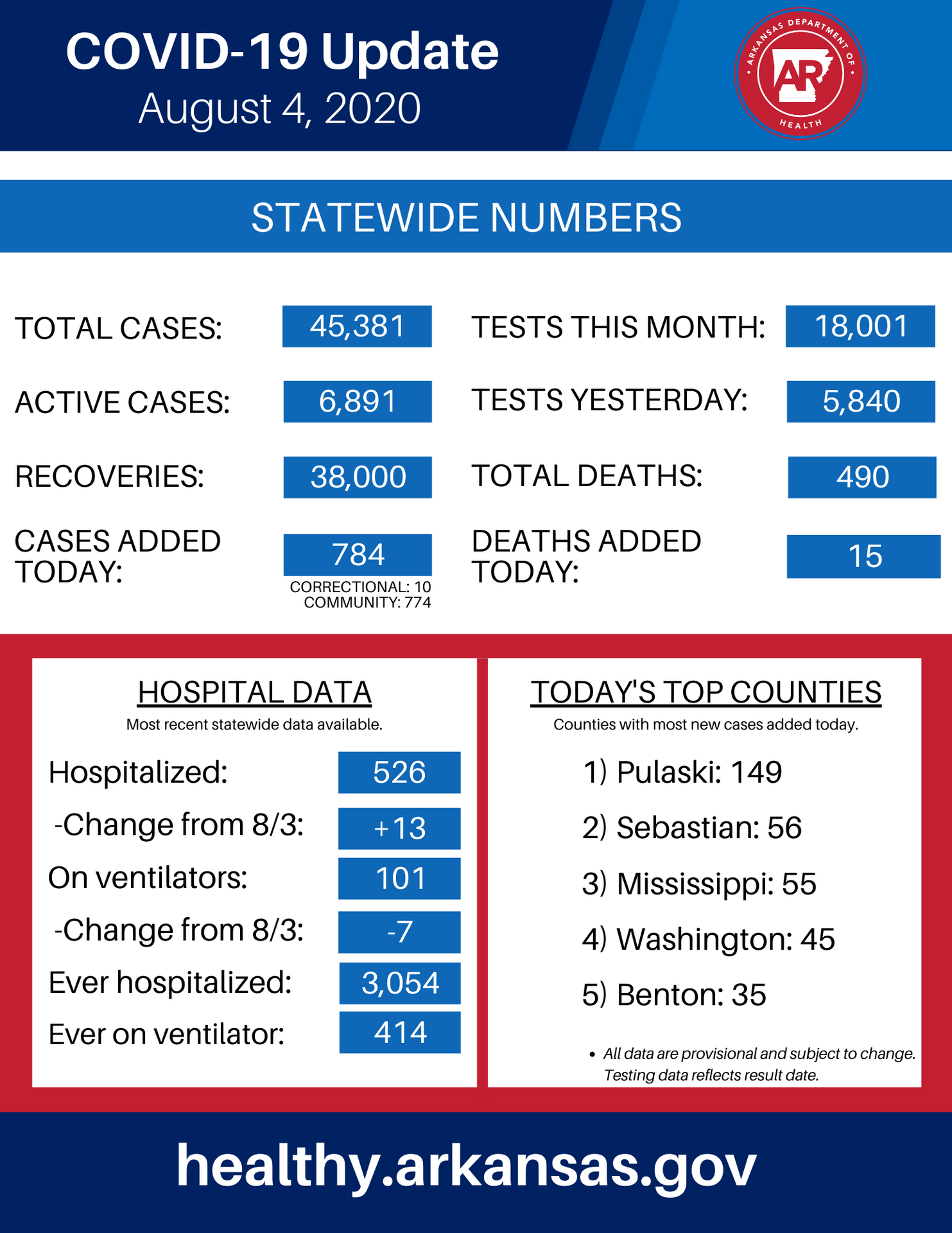 In the past 24 hours, the number of new cases in Arkansas was 784, with 774 from the community and 10 from correctional facilities. The governor shared the top counties for today’s new case counts, which included Pulaski with 149, Sebastian with 56, Mississippi with 55, Washington with 45, Benton with 35, Saline with 25, Crittenden with 24 and Jefferson with 23.

The number of tests completed in the past 24 hours was 5,840. The Department of Health team, which works 24/7, recorded its highest number of test results in a 24-hour period at a total of 2,212.

Hutchinson explained that the record high of 526 hospitalizations “is reflecting the increase in cases from some time ago when we were at a higher level than we are now.” He said they are hopeful that the recent flattening of new cases will result in a decrease of hospitalizations over time.

Acting Secretary of Health Dr. Jose Romero said it is very important for those who get a COVID-19 test to provide a good phone number so they can be reached by the contact tracers. Also, he encouraged all who “are concerned enough to have COVID testing, please enter quarantine when you get that done; do not wait for the test to come back.” Isolation should continue until further instructed by contact investigator or by electronic means, he said.

Hutchinson said that some of the Pandemic Unemployment Assistance and unemployment claims are on hold because they have been identified as potential fraudulent claims. Secretary of Commerce Mike Preston “is working hard with his team to sort through those to get the legitimate claims paid, but [also] to turn over the fraudulent claims to law enforcement and the FBI, who has an ongoing investigation,” the governor said. Preston said that this is “a part of a national, even international ring, that is trying to defraud the system.” Information that may have been acquired from breaches over the past couple of decades, from which the information is stored for use at an opportune time like this one, said Preston. Because of this activity, more claims are having to be flagged than normal. There are currently 27,000 claims in the pandemic unemployment assistance program and an additional 10,000 unemployment claims on hold.

If someone receives a notification in the mail that they have been approved for an unemployment or a Pandemic Unemployment Assistance claim, “that’s a pretty good indication that somebody is trying to use your identity to accomplish fraudulent purposes. That happened to me; that can happen to anyone,” said Hutchinson. These fraudulent notices can be reported by emailing ADWS.InternalAudit@arkansas.gov, by calling 501-682-1058 (leave a voicemail), by visiting www.DWS.arkansas.gov or by filing a police report.

The governor began today’s update by saying that they are working hard every day on safe reopening of schools. The governor said he’s been in discussions with the departments of Health and Education, and that he’s been hearing from hundreds and hundreds of teachers. He said he is pleased to have postponed the start date for two weeks to study other states that started earlier and “better prepare in every respect.”