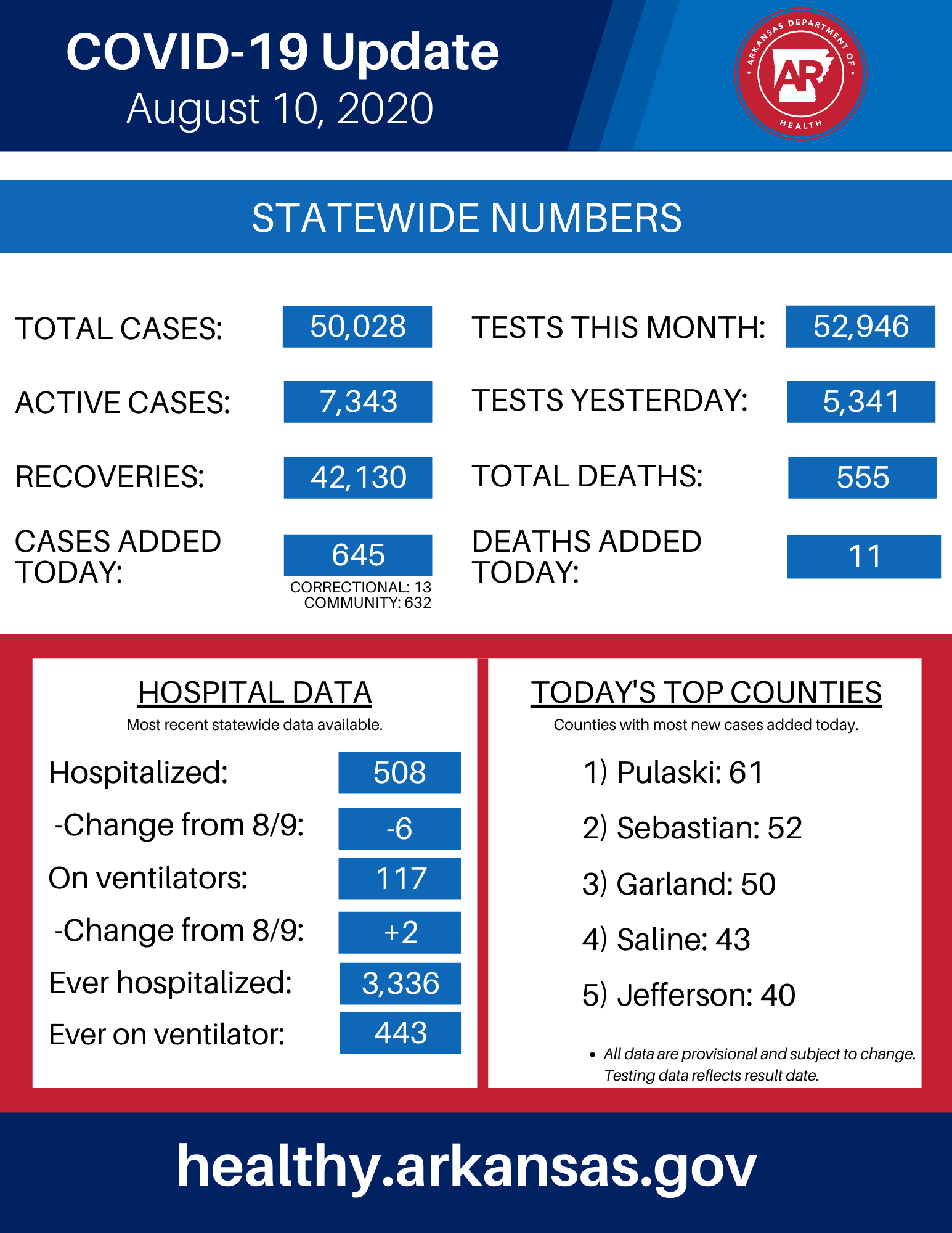 In the past 24 hours, the number of new cases in Arkansas was 645, with 632 from the community and 13 from correctional facilities. There were 772 new cases reported on Saturday and 572 new cases added on Sunday. Hutchinson shared the counties with highest number of new cases in the past 24 hours, which included Pulaski with 61, Sebastian with 52, Garland County had 50, Saline with 43, Jefferson with 40, Craighead with 32, Benton with 21 and Independence with 20.

Hutchinson was asked to comment on the state hitting 50,000 cases just over a month after Arkansas reached 25,000 cases on July 8, almost five months after the state recorded its first case on March 11. He said that the state has “achieved the objective of making sure that we manage the COVID cases in a way that our hospitals can handle the requirements to make sure we had the PPE, the infrastructure in place. So, in that sense, it’s been good management in extending the cases out.” But he said that “this is not the place to flatten out” at 700 or 800 cases a day, “so we have to continue to make progress,” which he said will be achieved by following the social health guidelines. He said that if daily case counts go up above 1,000 to 1,500 cases, the choices he has will be to put in more restrictions. He added that we “do not want to do that, we don’t want to go back.”

Hutchinson showed a new chart with the daily average of new COVID-19 cases in the state by week, which the governor said he believes shows the impact the mask mandate is beginning to have. The daily average for recent week, Aug. 2-8, dropped to around 650 from a daily average of around 800 during the week ending on Aug. 1. Secretary of Health Dr. Jose Romero said it may be too soon to say that the trend is truly going downward, but if the daily new cases this week remain in the 500-600 range, then that may be evidence that the mask mandate is beginning to be effective. Romero said it’s important to keep in mind that we should not slack as we start to see better numbers because if we do not keep our efforts up, the virus will begin spreading again.

Another chart showed the difference between a previous UAMS model’s projection of 55,000 cases by Aug. 10 to the actual number of just over 50,000. In a comparison among other southern states of cases per 100,000, Arkansas is shown in sixth position among the 10 listed. The same states are compared in testing per 100,000, and Arkansas came in third behind Louisiana and Tennessee.

The governor reminded viewers that antigen test results are not included in the daily test tallies, but the number of results received by ADH so far this month is 1,495.