480 new cases and hospitalizations down to 442 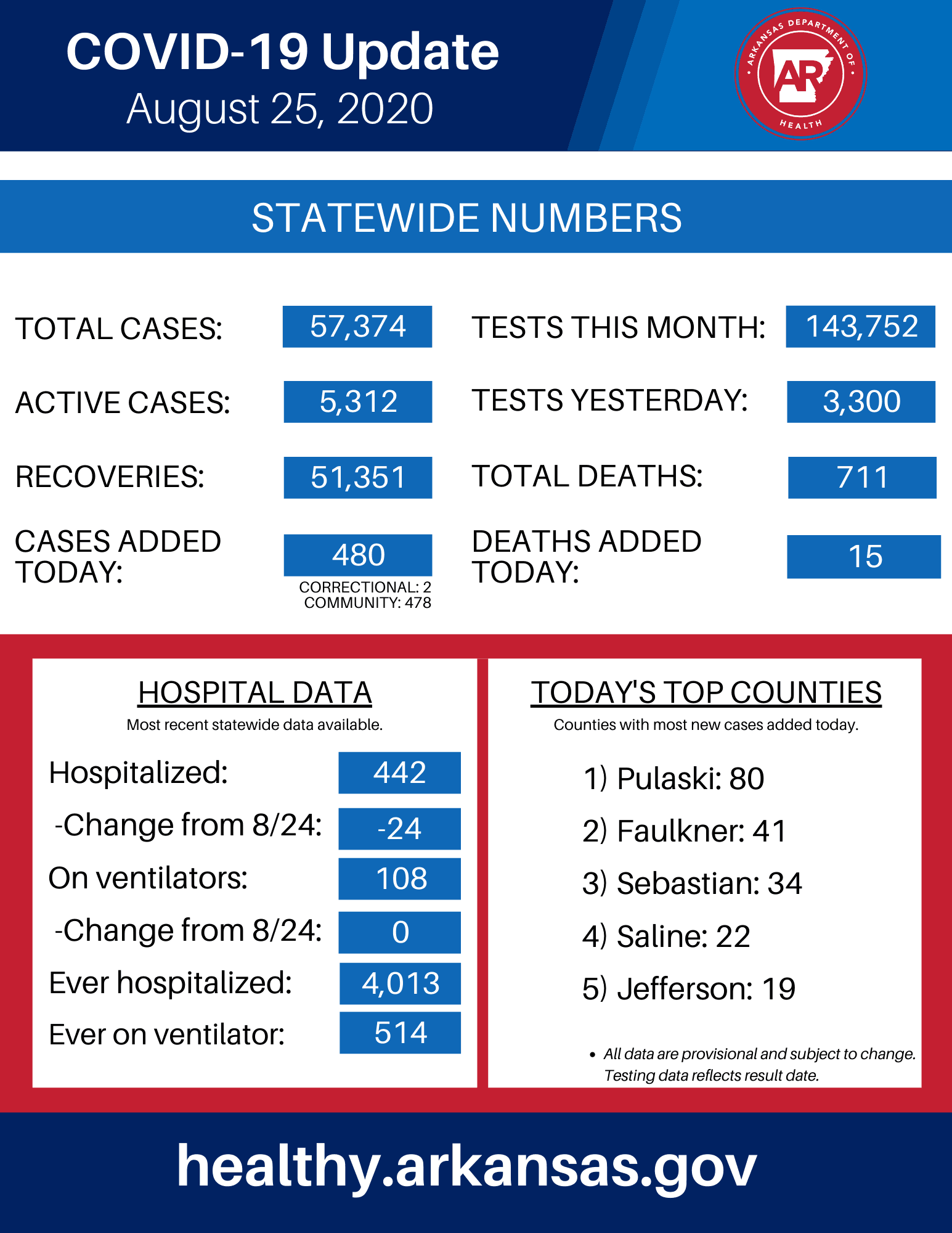 *Today’s Garland County data not yet available on the ADH dashboard.

The number of tests completed in the past 24 hours was 3,300, which Hutchinson said was lower than they would like. “Some of it is dependent upon demand, and people saying, ‘We want to go get a test.’ And, so, there’s only a certain amount that we can control,” he said. He has challenged ADH to “invigorate those testing numbers so that we can have a higher testing result, meet our goal and to have a good surveillance of what we see across the state.” The county health units can give a quick turnaround on a COVID-19 test that is free and reliable, he said. Secretary of Health Dr. Jose Romero echoed Hutchinson on the importance of individuals seeking out tests when needed, urging Arkansas residents to not get “testing fatigue.” Hutchinson also shared a challenge from an anecdote of a student who got a COVID-19 test, but went to school before getting the results. The student’s test was positive, so an additional six students had to be isolated. This challenge is for quick test turnarounds, but also for everyone getting a test to isolate and not threaten exposure of others.

As today’s press conference was in Malvern, in the Southwest Public Health Region of the state, Hutchinson shared additional information and charts relating to the virus in that area. The growth rate of new cases from Aug. 16-22 by Public Health Region showed that the Southwest Region had the highest growth rate, followed closely by the Northeast Region. The 0-17 and 45-64 age groups were neck-and-neck for the highest growth rate in this region by age group.

Hutchinson announced that $7 million in additional grants have recently been awarded through the Arkansas Rural Connect grant program to get high speed internet into rural communities. There was an additional $100 million in funds added to this program to expand high-speed broadband throughout the state.

Hutchinson shared that he received the latest White House State Report yesterday, and Arkansas has moved from the red classification to the yellow in terms of state positivity, meaning the state moved below 10% positivity rate in the past week. The report also measured the number of new cases per 100,000, and the state is still in the red classification for that category. The governor said that in order to be lowered down to yellow, the state would have to record fewer than 3,000 new cases in a week. Although the report included possible recommendations for additional business and social gathering restrictions, the governor said this is good information, but that “we have to make our judgements as to what is best for Arkansas and the balance as to what we’re trying to achieve.”