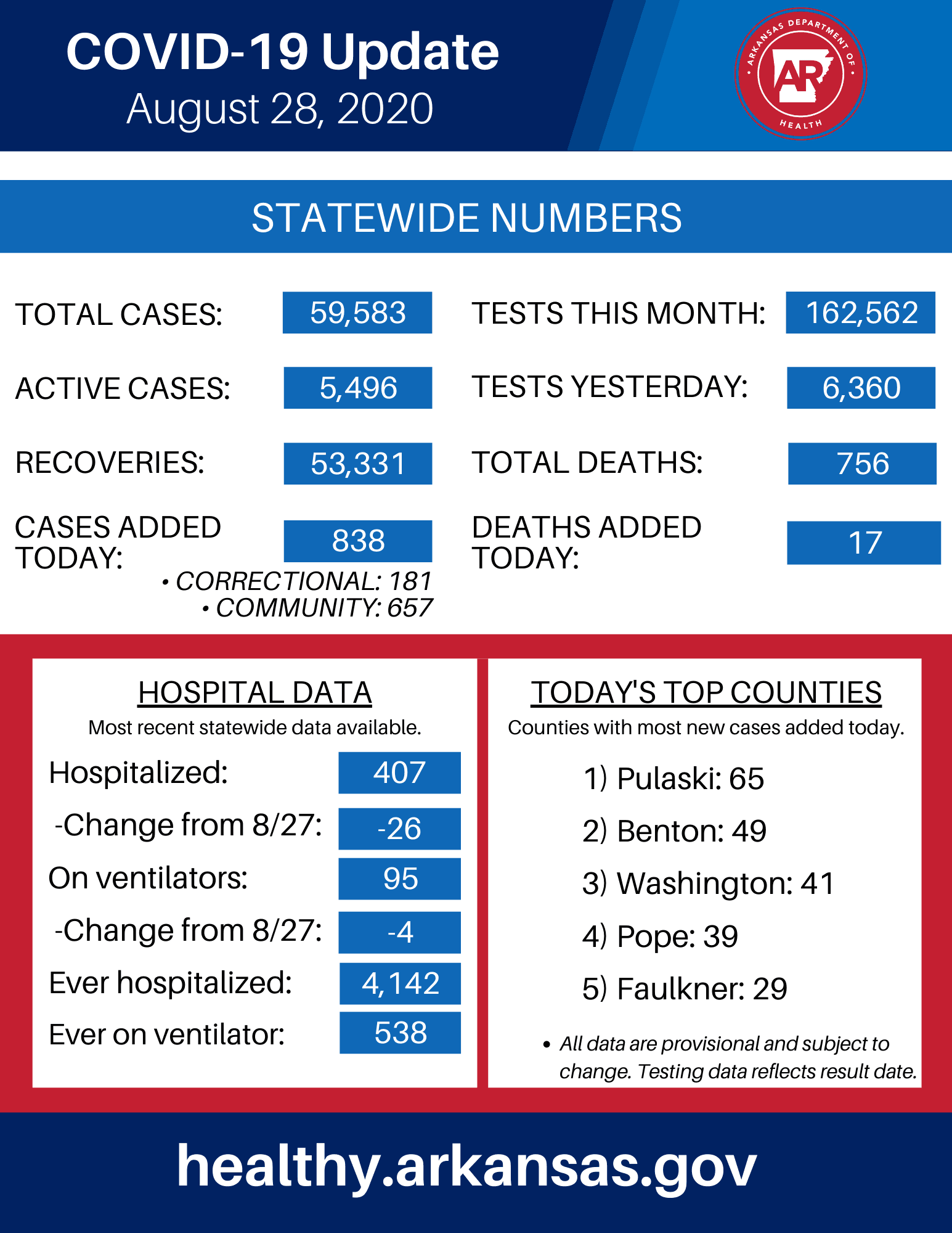 * Friday’s data for Garland County not available on the ADH dashboard at time of posting.

Regarding Tropical Storm Laura, the governor said it “hit the state pretty hard, but we’re very grateful. I think we came through this better than expected, even though there was significant property damage in South Arkansas and other parts of the state.” There were 52,000 households without power, which was down to 32,000 at the time of the press conference. There have been no reports of injuries or deaths.

Hutchinson showed a chart of daily average of new cases by week. It which showed two weeks of declining averages following the peak three weeks ago before an uptick again this week, which he admitted, “I’m frustrated with; I’m sure many people in Arkansas are frustrated with.” The drop in hospitalizations provides a cushion if the new cases bring another rise in COVID-19 patients requiring hospitalization.

A new color-coded state/county map was shown with the 14-day positivity rate average by county. Garland County had an 11.1% rate.

Secretary of Health Dr. Jose Romero reminded everyone that anyone getting a COVID-19 test must go into quarantine isolation until they are contacted with the test result. When asked about students who get a test due to possible exposure or COVID-19-related symptoms, Romero confirmed that the student’s parents and family members would also need to undergo quarantine.

To university and college students, Romero said it is important to maintain important social distancing and wearing of masks over the weekend, on campus and off campus. He said ADH is starting to see outbreaks on college campuses in the state. They are increasing testing and having specific testing events at several campuses over the next week. “If we do not bring this under control, it can spread environment into the community environment.”

After meeting with representatives from the deaf community, he asked that workplaces, businesses and offices be mindful of the deaf community in this time as they face communication challenges in not being able to read lips due to face masks. He showed a mask with clear plastic over the mouth portion that is being produced by the Department of Corrections as an example of a measure that could be taken for the benefit of communicating with deaf persons.

Hutchinson ended with a message leading into the weekend following “a good week in education,” in which he thanked “all the students, athletes, the teachers and the staff who have done a remarkable job of getting us through this week in the safest fashion possible.” He reminded everyone to be responsible this weekend, because the behavior over the weekend will affect schools, workplaces and families next week.