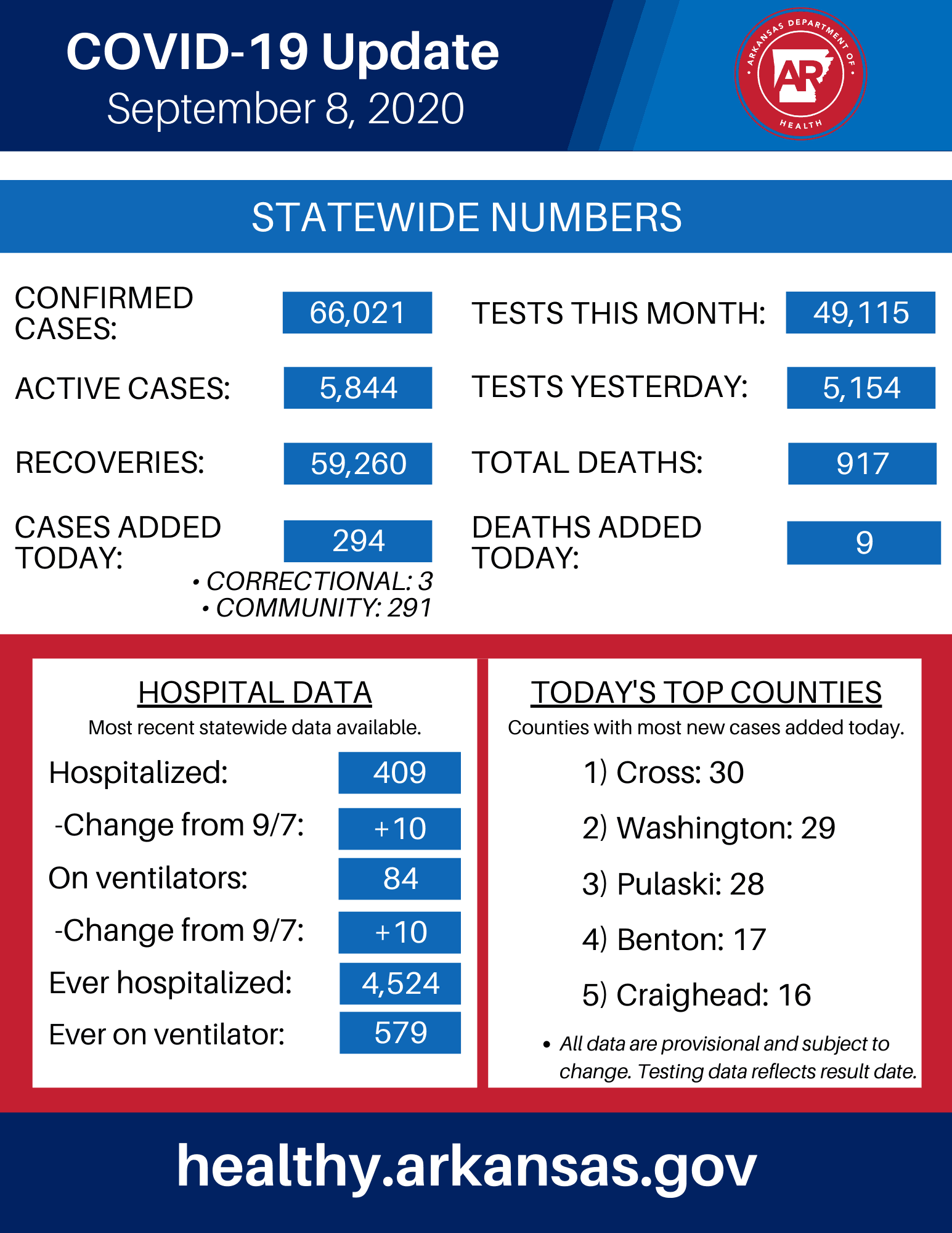 The number of tests completed in the past 24 hours was 5,154. There were 139 antigen tests performed with 20 positive results.

The public health regions with the highest percent growth between Aug. 30 – Sept. 5 were the Northwest, with 6.8%, followed by the Northeast, Central, Southeast then Southwest. The state’s age group growth has primarily come from the 18-24 (college age) group, followed by 65-and-older, then the 0-17 group.

Hutchinson gave an update on the multi-state purchasing agreement led by the Rockefeller Foundation, partnered with the National Governor’s Association and with a number of states joining together in order to purchase a larger volume of antigen tests that will be coming on the market. Hutchinson announced the state is using $4 million to purchase 120,000 antigen test kits through this agreement to be used throughout Arkansas. This purchase will not require any state funds, as it will be done with CARES Act funding already approved for testing. These antigen test kids will be used in local health units, 10 college health centers and select community testing sites. He said the goal is to have the test supplies available in October and through the end of the year.

Secretary of Commerce Mike Preston said that the state is ready to begin sending out the Lost Wages Assistance (LWA) extra $300 weekly compensation. It is for those who currently receive Pandemic Unemployment Assistance or at least $100 of weekly unemployment insurance and who self-certify that their unemployment is due to the COVID-19 pandemic. It will starts for the week of Aug. 1. Unemployment insurance claimants can self-certify by calling 501-907-2590 or at arknet.arkansas.gov. Pandemic Unemployment Assistant claimants are automatically eligible with no need to self-certify. The LWA compensation will continue at one week at a time, as it is still unclear as to the funding stream from the federal government. For those earning less than $100 a week from unemployment insurance, the state is going to match the $300 for qualifying families through the Temporary Assistance for Needy Families (TANF) program.

Preston also shared that the state’s unemployment is down to 7.1% thanks to declining unemployment claims in Arkansas seven straight weeks and 12 of the last 13 weeks.

Hutchinson announced that there are four additional grants, totaling $5 million, for high-speed broadband internet to be developed in rural areas of Arkansas.