The following statistics were shared at the governor’s weekly COVID-19 update on Tuesday, Dec. 29, and posted on the Arkansas Department of Health’s (ADH) website:

Hutchinson said that there has been a 33% increase in daily new cases and a 10% increase in hospitalizations since Thanksgiving, “even with a vast majority of Arkansans taking extra steps to be careful.” He added that he knows many Arkansans took extra measures over the Christmas holiday to be careful, but with increased travel, there is anticipation of a continued increase in cases. “This is a challenging time for Arkansas because of this. While everybody is trying, we have to recognize that these increases in cases will lead to an increase in hospitalizations,” said Hutchinson.

ICU bed capacity in the state is down to only 5%, and total bed capacity is at 21%, according to Hutchinson. He said that although this shows that hospitals have some margins statewide, that some geographic regions in the state are struggling worse than others.

Dr. Jerrilyn Jones, ADH preparedness medical director, provided an update on COVIDComm. She said that in less than two weeks, COVIDComm has facilitated 64 successful transfers of out of a total of 122 patients entered into the system. She said that they are running into difficulty finding places for patients to go. Some patients have been on waiting lists and hospitals have had to find beds for them in other states. She said that Arkansas hospitals regularly accept out-of-state patients, as well.

Secretary of Health Dr. Jose Romero said he expects further increases in cases in the coming weeks, which “can have profound repercussions.” As New Year’s approaches, he urged reconsideration of any group gatherings outside of one’s nuclear family. “We are already on a curve, and if we add more cases to that we are in danger of overwhelming our hospital system even though we have in place a very robust way of finding beds,” he said.

Hutchinson announced that the emergency declaration for the state, which was set to expire on Dec. 30, is being extended for another 60 days.

He said that the state has received 31,700 doses of the Moderna vaccine, which is being initially allocated for long-term care facilities and is being administered by pharmacies. He said that of those vaccine doses, only 1,680 have been administered as of this morning, but he expects the pace to pick up rapidly in the coming days. “I am asking our large retail pharmacies, and all of our pharmacies, to really understand what is at stake here to help us to get this vaccine administered as quickly as possible because lives are at stake. I know there’s been unique challenges, but we have a job to do. We have to get this vaccine, as it’s received, administered because this is what will turn the tide,” he said.

Of the Pfizer vaccine allotment that has come to the state, which are being allocated to healthcare workers, 48.2% of the doses have been administered so far. He said healthcare workers are responding very well.

He hopes that all of Phase 1A – healthcare workers, first responders and residents and workers at long-term care facilities – will have had access to the vaccine by the end of January. At that point, he hopes they can move to Phase 1B and have a better idea of a timeline for the broader population.

Hutchinson said he is pleased with the recent congressional action for additional COVID relief, and that they are tabulating the impact it will have on Arkansas. In addition to unemployment benefits and stimulus checks, there are funds for vaccine distribution and approximately $800 million to benefit educational programs in both K-12 and higher education in the state. 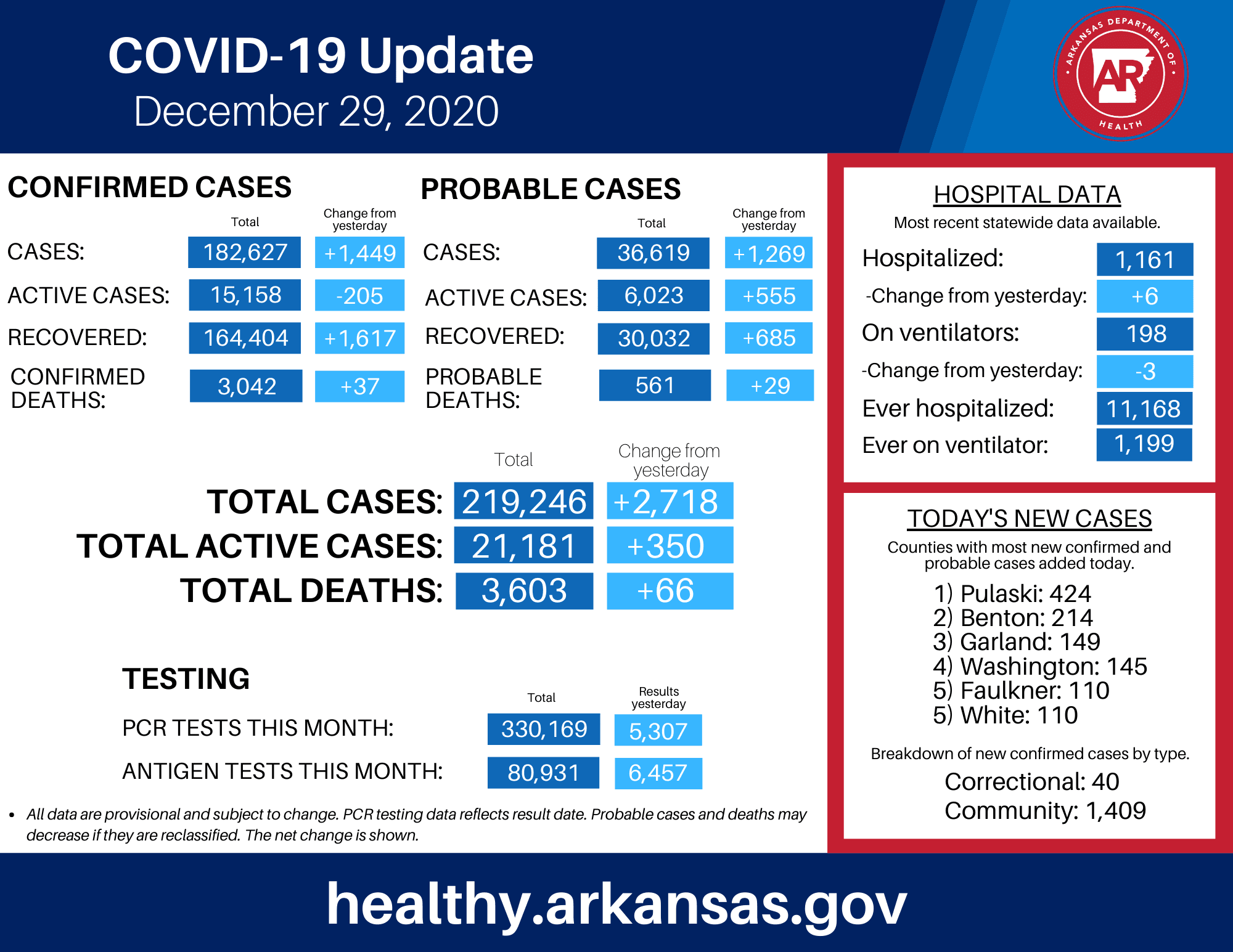