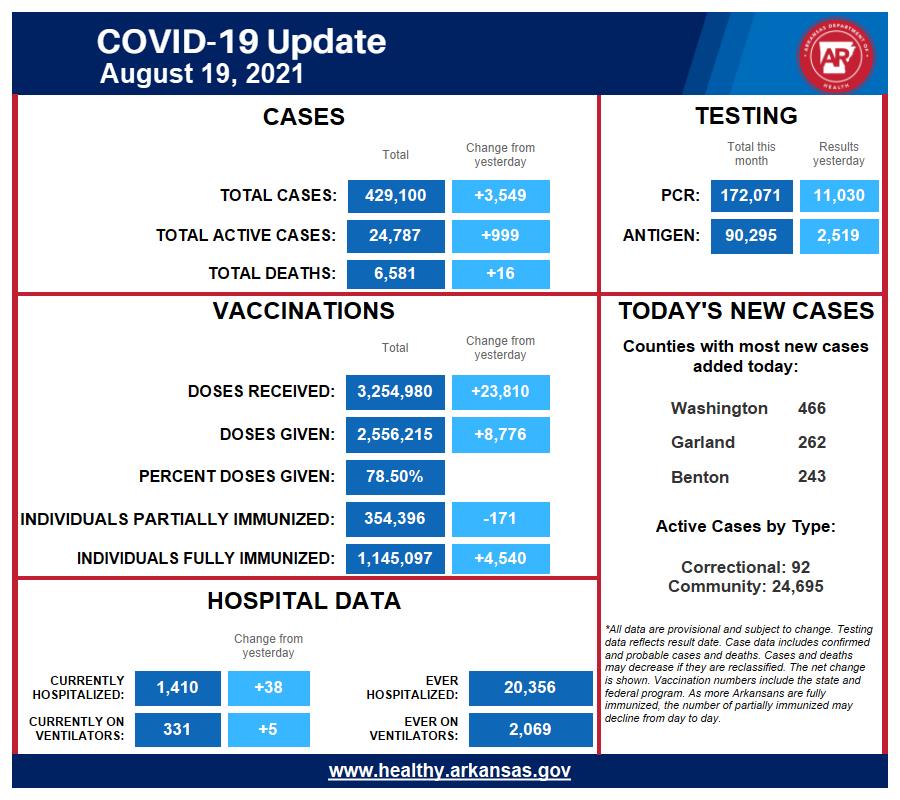 The following statistics and information for Thursday, Aug. 19, were shared at a press conference with the governor and/or were posted on the Arkansas Department of Health’s (ADH) website:

A total of 3,589 new cases was reported statewide today, and Garland County had its highest daily total and the second-highest county total for today at 262 new cases. Active cases rose 999 to 24,787. Hospitalizations rose 38 to 1,410, and an additional five COVID patients required the use of ventilators, up to a total of 331. Hutchinson said that there are currently 23 ICU beds available in the state, up from a low of only eight available beds reported last week.

Although Hutchinson attributed today’s rise in new cases to reporting from school districts, Arkansas Department of Education (ADE) Deputy Commissioner Dr. Ivy Pfeffer said that according to ADE data, all schools are open and there are currently no school or district-wide modifications due to COVID. She said that in spite of positive cases, disruptions have been minimized because of vaccinations in students and staff, as well as the districts that have implemented mask mandates, which cut down on the number of quarantines.

Hutchinson commended boards and district leaders across the state. Because of Judge Tim Fox’s ruling, districts have the opportunity to make their own decisions regarding mask mandates. Of the state’s 262 districts, 118 have adopted a mask policy, which he said covers a majority of the students in the state, while 87 have chosen not to enact a mandate and 57 have taken no action.

A total of 500,000high-filtration masks for Arkansas students, with 325,000 specifically made for children, are being delivered to the schools across the state this week.

Updated CDC data shows that Arkansas now has 51.2% of the total population are at least partially vaccinated. He said the state will continue to emphasis vaccinations as it is the best path to avoiding hospitalization or serious consequences from the virus.

The FDA has authorized and recommended boosters of the Pfizer and Moderna vaccinations for those who are moderately or severely immunocompromised. The state is also preparing for the anticipated authorization of Pfizer and Moderna booster shots for the general population. Secretary of Health Dr. Jose Romero said the general population booster shots will be given in a phased approach, and that these individuals will not need the booster until eight months after they received their second dose.