The following statistics and information for Tuesday, Aug. 24, were shared at a press conference with the governor and/or were posted on the Arkansas Department of Health’s (ADH) website:

Gov. Asa Hutchinson announced that the state’s ICU beds for COVID patients are all full as of the 11:15 a.m. press conference. “Everyone should know the strain this is on our hospitals, and the need to get our vaccinations and how critical our bed space is,” he said. Hospitals are trying to bring additional negative-pressure ICU beds online. He said that around a month ago the state had dropped to six available ICU beds for COVID patients, so having no COVID ICU beds available is an unprecedented event. There are some non-COVID ICU beds still available.

Hutchinson was on a phone call with the White House Coronavirus Task Force, the CDC Director and others in which several topics were discussed, including vaccine booster shots. The FDA has approved booster shots for those who are immunocompromised, and the earliest booster shots that will be available for the general population will be Sept. 20 for those who are eight months after their second dose of the Moderna and Pfizer vaccines.

The average age of hospitalized COVID patients has dropped from over 63 in November to 54.6 in August. The governor attributed this to the Delta variant's more serious consequences in the younger groups, as well as the vaccination rate differences between the older and younger populations.

ADH will be posting an advisory on veterinary-grade Ivermectin following increasing numbers of calls into the state’s Poison Control Center. Ivermectin that is intended for animal/livestock use is not to be used for human consumption. There are approved uses for Ivermectin in both humans and animals, but it should only be taken by humans as prescribed by a physician.

Secretary of Education Johnny Key reported that there has been an increase in the number of cases of students and staff with almost 300 more between yesterday’s report and last week’s report, but no districts have had to make modifications to their on-site instruction. 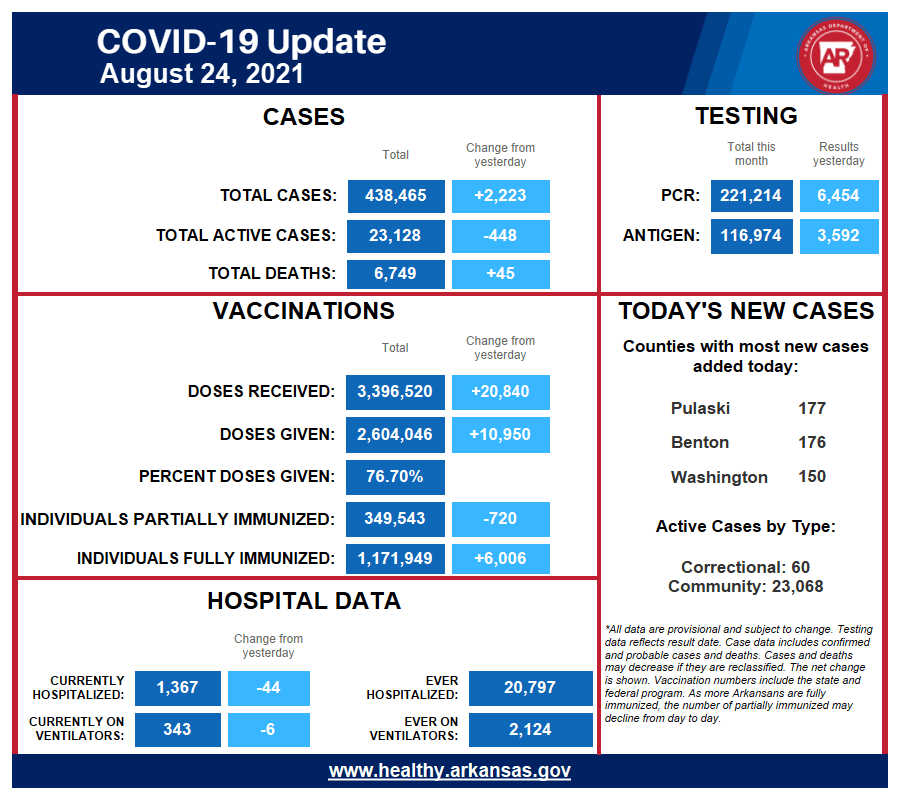