Federal Aviation Administration (FAA) rules apply to the entire National Airspace System -- there is no such thing as "unregulated" airspace. Drone operators should be familiar with the difference between controlled and uncontrolled airspace, and where you can legally fly. Controlled airspace is found around some airports and at certain altitudes where air traffic controllers are actively communicating with, directing, and separating all air traffic. Other airspace is considered uncontrolled in the sense that air traffic controllers are not directing air traffic within its limits.

In general, you can only fly your drone in uncontrolled airspace below 400 feet above the ground (AGL). Commercial drone operators are required to get permission from the FAA before flying in controlled airspace. Learn more about the rules for Certificated Remote Pilots and commercial operators on Flying Drones Near Airports (Controlled Airspace) – Part 107.

Remember, there are thousands of private pilots who fly in both controlled and uncontrolled airspace at various altitudes, and they usually cannot see your drone until it's too close for comfort. Drone operators are responsible for staying away from manned aircraft, not the other way around!

There are different type of drone pilots and each have separate rules and regulations: Commercial, Hobbyist and Recreational and Public Safety and Government.

Generally, drone operators should avoid flying near airports because of other air traffic. It is very difficult for other aircraft to see and avoid a drone while flying, and drone operators are responsible for any safety hazard their drone creates in an airport environment.

Option 1: If you have a Remote Pilot Certificate and are following part 107 rules, you must get permission from air traffic control to fly in controlled airspace. The FAA can grant permission two different ways – LAANC or DroneZone.

Option 3: If you are a public entity (law enforcement or government agency), the FAA may issue you special permission to fly in a designated location near an airport. Read information about the requirements for law enforcement and government drone operations.

Still unsure if Part 107 rules work for you and your intended operation? Check our user identification tool.

Some operations are not covered by Part 107 and will require a waiver. Here are some common examples of Part 107 sections that are subject to waiver:

*The FAA will not waive this section to allow the carriage of property of another by aircraft for compensation or hire.

If your operation will require a waiver, read about the Part 107 Waiver application process. 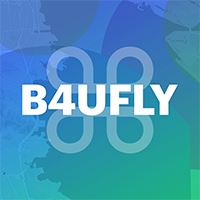 Zoom in on this map to Hot Springs (or any other location) to see the approved areas to fly drones.

You can also download the mobile app for B4U Fly and see the areas on interactive maps.