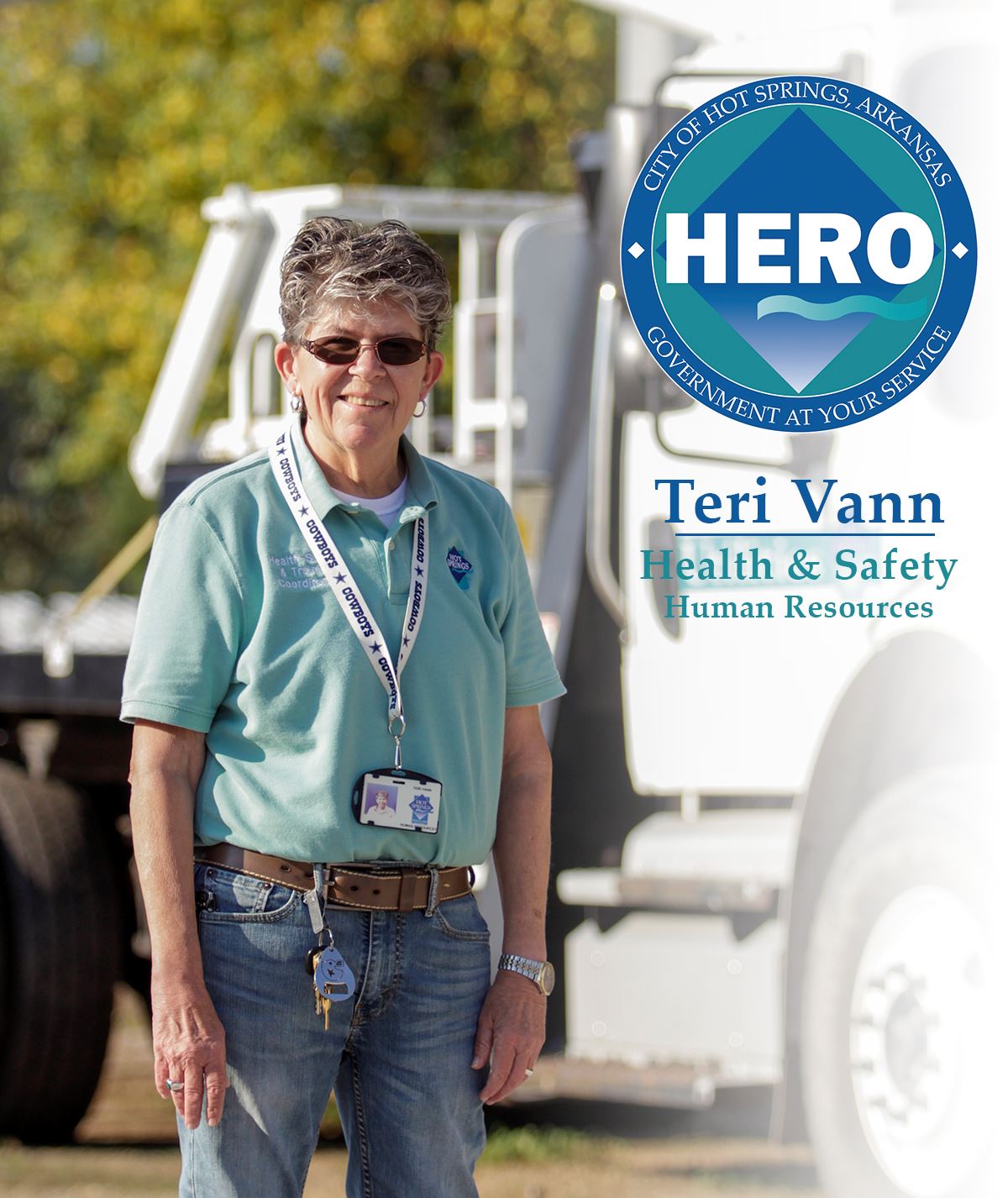 At around 11:30 a.m. on Wednesday, August 7, Teresa “Teri” Vann suffered a stroke in the City Hall Annex. The following day, after surgeons at UAMS in Little Rock were able to remove the clot from her brain, she begged the doctors to let her return to work on Friday.

She was anxious to get back to finalize the schedule for the City’s first ever crane training. A compromise was made for her to return a week after the stroke on the following Wednesday, yet she was greeted in the hallway that morning by her supervisor and the director of Human Resources, who let Teri know she would be going home to be on “Minnie’s Medical Leave” until the next Monday.

Needless to say, Teri successfully organized the mobile crane training and certification program. A total of 13 Utilities employees completed the 16-hour, two-day class, along with two representatives from the Arkansas Department of Labor. The Altec Sentry Program is an OSHA and ANSI compliant training program on safe operating procedures. Participants received a certificate and wallet card for completing the class.

Teri was nominated for the Hot Springs HERO honor for her efforts in overseeing this important initiative. She is only the second employee to earn this accolade, which was established by the City to honor any of the more than 600 employees who go a step above in service to our community.

The crane training is only an example of Teri’s efforts since she started as the health and safety coordinator for the City in June of 2016. Within her first year, she had established the Rave Alert system, a program that notified emergency responders the day of her stroke. She coordinated with the Rave Alert company and was responsible for identifying all the offices and rooms at City Hall, the City Hall Annex, the Bill Edwards Center (Finance and Utilities) and Hot Springs Memorial Field Airport. She also shared tutorials with the employees and went through these facilities to demonstrate all features of the program, which includes alerting responders for medical emergencies, active shooter situations, or other fire, police, or 9-1-1 needs.

Another of Teri’s initial accomplishments was creation of two five-person safety inspection teams. Each month, she and one of the teams inspect facilities based on a schedule she produced to ensure each City facility is seen at least once a year. She wrote a mission statement and a charter for the teams, and taught each member how to spot possible safety hazards.

As she continues to work closely with the more than 600 employees, particularly the crews out working across the City, she solidifies their trust and identifies areas for improvement.

Teri attended Northeastern State University, where she majored in Music: Voice and Instrumental, before joining the Army. While in college, she dreamed of teaching water safety and life-preserving methods, though, so she loaded up with all sorts of swimming classes. Fast-forward and she found herself working in Maumelle as a warehouse manager, where a part of her duties included safety and training. Following that passion, she was accepted for an 18-month OSHA and Army tactical training internship at Fort Rucker, Alabama. On to Corpus Christi, where what started as a two-year on-the-job training stint turned into her being hired full-time for what ended up being 10 years and six months. She was a part of a team of safety officers and specialized in health and safety and explosives safety. She also enjoyed being asked to sing the national anthem at official functions. She retired after 23 years of federal service and moved to Hot Springs. She and her voice were missed so much at the base in Corpus Christi they asked her to send them a CD of her singing the anthem for use at functions moving forward.

She had known for some time she wanted to end up in Hot Springs, and had even bought a home here in 2008 – seven years before being able to move full-time. After she made the move, she only made it seven months before applying for the job with the City. “I hate being idle,” she said.

The City of Hot Springs employs more than 600 dedicated servants for our community.  If a City employee has gone a step above in service to our community, either in a specific incident or for continued efforts, we want to honor that employee as being a Hot Springs HERO.