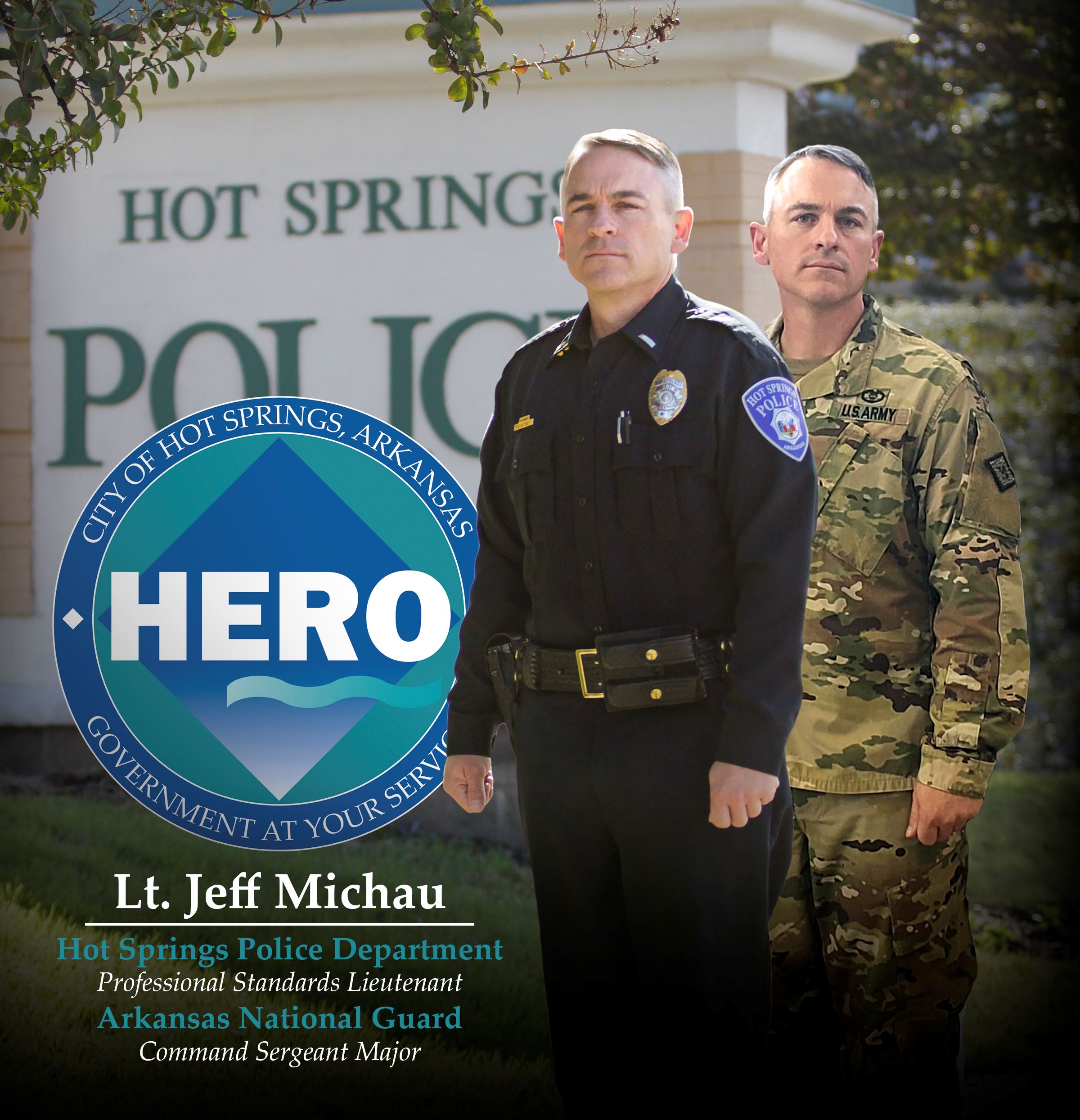 The Change of Responsibility ceremony took place at the Robinson Maneuver Training Center in North Little Rock, at which Michau assumed responsibility from outgoing CSM Tony W. Bowen with the traditional passing of the colors. Michau previously served as Command Sergeant Major of the 871st Troop Command Battalion.

He is the third and most recent City employee to earn the Hot Springs HERO honor, which follows a nomination by a fellow City staffer and recognizes work that goes above and beyond for Hot Springs. In Michau’s case, for outstanding service to Hot Springs, Arkansas, the country and beyond.

As one of only a handful of officers still serving Hot Springs who originated at the former police station, the 24-year veteran of the HSPD has recently been overseeing the force’s radio system upgrade, the dispatch area remodel and construction of a new lobby area and front offices.

When the new radio system is complete, HSPD will join the Arkansas Wireless Information Network (AWIN) and will have interoperability with emergency medical services, other area law enforcement agencies and those on the AWIN network from across the state. The dispatch remodel will allow LifeNet operators to work alongside 9-1-1 operators, and the first-floor construction involves securing the lobby area and adding office spaces.

Other aspects of Michau’s work at the police department include maintaining the fleet, facilities and serving as the Internal Affairs investigator. His role was formerly called Research and Planning, and he said a significant part of what he does is to “make sure officers have the tools they need to do their jobs effectively.”

Michau graduated high school and enlisted in the Arkansas National Guard as a combat medic in 1990. In 2003, he was deployed to Iraq where he served on the treatment platoon and was awarded the Combat Medic Badge for actions taken on April 24, 2004. He was deployed again to Iraq in 2011, and the following year was promoted and assigned as the First Sergeant for the 296th Medical (GA) Company in Hot Springs.

Balancing his full- and part-time jobs has been challenging and requires substantial travel and use vacation hours to handle Army responsibilities. As CSM, he anticipates more than 15 weekends a year will be dedicated to the 87th, with added events needed for strategic planning, conferences, and so on.

“I joined when I was 18. I’ve been doing it a long time, so I don’t know any different,” he said. “As challenging as it may have been at times, it’s been equally if not more rewarding. We train, mentor and coach the future leaders for the Arkansas National Guard, and that is very rewarding.”

He said the HSPD now has several officers who are members of the Army Guard and Reserves, Air Guard and Navy Reserve. These members of the department are training and learning the value and process of what it takes to be a leader within their respective branches of the military. 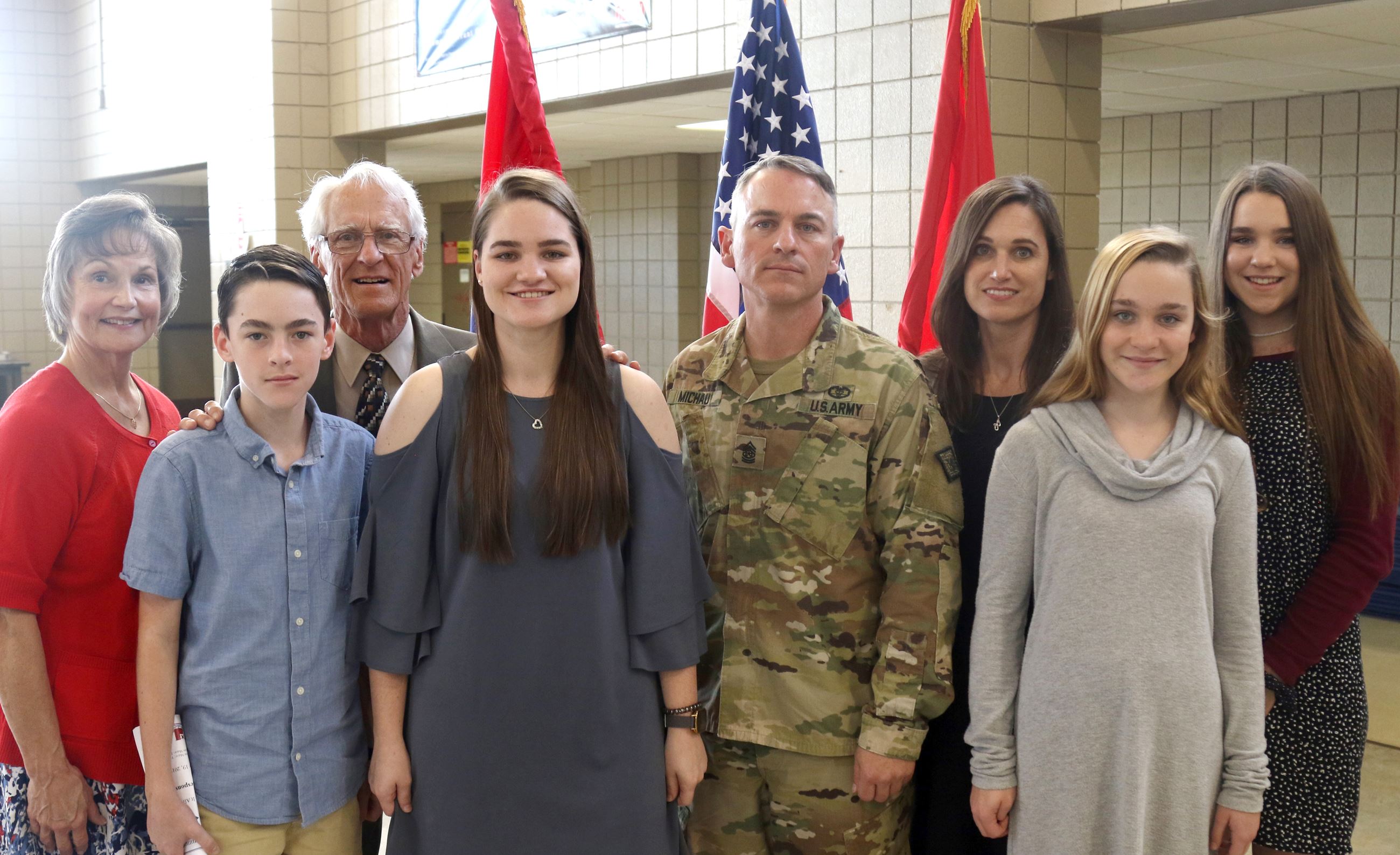 He is also thankful to the Army and the GI Bill for his bachelor’s degree. He had earned an associate’s degree before joining the force, and after taking classes as he could fit it into his schedule, he graduated with honors from the University of Arkansas at Little Rock in 2012 with a Criminal Justice degree.

He and his wife, Jennifer, have been married for 25 years and have four children – Emily, Autumn, Nicolas and Reagan.